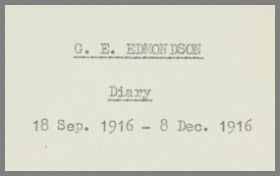 22nd Sept. 1916
Signalling & telephones. Received letter from Wyn also snaps of the Sunday stunt at Winchester. Did not go out but fed horses which arrived today.

23rd Sept. 1916
Signalling in morning. Walked to Amesbury & had a try for photo being taken. Too much of a crush. Met Billie & rest and had tea. Got motorcar back to camp. Received letter & photo from Beattie.

24th Sept. 1916
Sunday today. Had church parade. Afterwards marched passed the General for practice for Wednesday's visit by the King of England. Did early morning, midday, afternoon & night stables today so did not go out. Cleared up for inspection tomorrow.

26th Sept. 1916
Reveille 5.30. Up & rushed round to get ready for marching order for Bulford. On Mess Orderly. Marched off at 11.30 for Bulford. Part of the Brigade mounted with gun & full equipment. Rest old 27th had to footslog. Anyhow arrived at Bulford very tired. Marched passed General of 3rd Division. Artillery first with Infantry, A.M.C. &c. coming afterwards. Great sight. Fully 40,000 men on review. Arrived back at 7.30 hungry & tired. Had a good tea. Cleaned up & had a shower.
Gepost door Krupke op 19:52