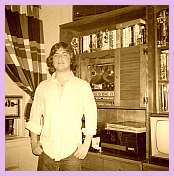 Monday, April 26, 1971
Neil Lefkowitz was on the Flatbush Avenue bus to BC this morning with me and he talked about the SDS’s own little demonstration in Washington. There are new demonstrations planned: nonviolent civil disobedience and such.

Ray and Lou are driving a van down to D.C. on Saturday, though I think too much of that sort of thing may be counterproductive.

Elspeth wasn’t speaking to me this morning. She had a different story about what went on in Washington than Shelli did, and she was angry that we told Aaron that she was no longer supporting him. I was upset by Elspeth, but as Gary said, consider the source.

Scott and Avis had a fantastic time spending the weekend together. Each of them separately told me that they really liked the other.

In Poli Sci, we discussed the Japanese political structure and the Liberal Democratic Party, and in Russian, Prof. Roberts lectured on Saltykov-Shchedrin. After class, I met Gary, Shelli and Ivan (wearing one of his more outlandish outfits), and we had lunch in the Faculty Dining Room.

Gary said he was stoned at Fort Dix all weekend on National Guard duty, and that Kjell, now that he’s been called up for basic training with the Reserves at Camp Campbell in Kentucky, is really depressed and withdrew from school for the term today. Later, I tried to call Kjell but he wasn’t home.

Ivan was his usual conceited self; even Shelli is getting tired of his attitude. She had to give a speech today, and I walked her to class beforehand. Then Joel collared me and asked me to take minutes at the Finance Committee budget meeting.

Dean Archie MacGregor spoke for the Office of Student Activities; Larry Eisenberg for Kingsman; Fred Horowitz for WBCR; and Bob for Student Government.

Joel and Bob are trying to eliminate the chaos of last term, but whenever you’re dealing with allocating this much money, you’re in trouble.

I couldn’t find Shelli after the meeting, so after I talked with Mason and Mikey, who are wavering in their support of Leon, I went home to do some schoolwork.

Shelli called later, saying she’d spent a miserable afternoon with a talkative Timmy to get campaign leaflets from the printer in Williamsburg. After she came over, we took a drive to Rockaway.

Back in my bedroom, we almost went all the way tonight, but she cried out in pain when I thrusted too deeply. It was still “the best thing we’ve done,” she said, and I agreed.

She’s teasing me by saying she has a crush on Evan now.
Gepost door Krupke op 00:19