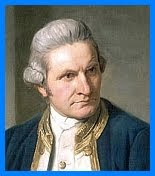 Thursday, 23rd. Fresh gales and Squally, with rain, the first part; remainder fresh Gales and Cloudy. P.M. saw some Men-of-War Birds, and Egg Birds, and in the Morning saw more Egg Birds and Tropic Birds. The Man-of-War and Tropic Birds are pretty well known, but the Egg Bird (as it is called in the Dolphin's Journal) requires some discription to know it by that Name. It is a small slender Bird of the Gull kind, and all white, and not much unlike the small white Gulls we have in England, only not so big.* (* Terns.) There are also Birds in Newfoundland called Stearings that are of the same shape and Bigness, only they are of a Greyish Colour. These Birds were called by the Dolphin Egg Birds on account of their being like those known by that name by Sailors in the Gulph of Florida; neither they nor the Man-of-War Birds are ever reckoned to go very far from Land. Wind North by West to West by North: course North 13 degrees West; distance 49 miles; latitude 24 degrees 43 minutes South, longitude 130 degrees 8 minutes West.