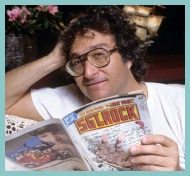 Here we are in London. Did you know that England is an island? I knew they were somehow disconnected from the rest of Europe, but, an island? Just like Florida. Tonight everyone will understand everything I say. Uh oh. They speak English here. I’ve been getting away with murder out there.

The shows in Austria and Germany went well. I realize I haven’t told you enough about the nature of the shows, how it feels to be alone up there with just a piano and have thousands (hundreds – CK [CK = Cathy, de echtgenote van Randy Newman]) of foreigners worship you. It’s a scrumptious (supercalifragilisticexpialadocious – CK) feeling and quite humbling (he doesn’t seem humble to me – CK) to think that One by his very presence can unite an entire nation as I did in Belgium is a wonderful thing. As Jackie Wilson once said, “There must be a cloud in my head. Rain keeps falling from my eyes.” The Irish Question, which I’ve been working on secretly for years – ooops – anyway, the Irish Question is too difficult to solve in one visit.

More importantly, a Little Criminal [aanduiding voor een Randy Newman-fan] suggested that I play Rider In The Rain in Munich. It’s always a risk to play that song except in Belgium or Holland. It’s got four chords in it and if people don’t sing along it makes for a difficult minute and a half. Anyway, someone once said, I’m not saying whether or not I agree, that the Germans are the only people in the world who think a naked woman in a trash can is funny. The audience did fine with Rider In The Rain and I’m grateful to the Little Criminal who suggested it, and I’d like to thank the Academy.

They had the Brit Awards here the other night, their big music award show, there was a vicious attack on Justin Timberlake in one of the papers. When Justin and I were having breakfast this morning (he shouldn’t be telling you this – I do my best to hush these things up – last week was fashion week here – CK) I tried to console him about the bad publicity. I think he felt better before he left.

While I’m in London I’m looking for a new Bruno. The one I have at home is too busy Bruno-ing for other people. I hear they have some good Brunos here. My next Bruno will definitely not be a reggae Bruno but will either be a math or massage Bruno. (I’m getting a Bruno too – my Bruno will be a travel Bruno who can go on these trips instead of me – CK)
Gepost door Krupke op 19:57